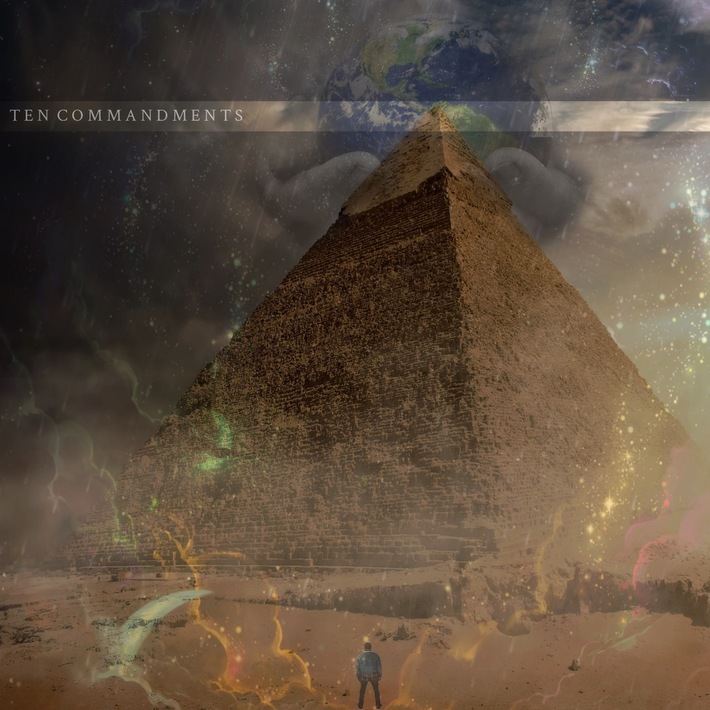 CLEVELAND, OH – It’s one thing to create music people like – music you can nod your head to and enjoy for a brief moment in time. It’s a whole different thing to create an experience that sparks debate and makes people think more deeply. Music like that becomes more than just a mere enjoyable background noise – it becomes the type of art that can change lives.

That’s the kind of music Cleveland-based artist Ethos wants to create, and his new album “Ten Commandments” is the perfect testament to that mission. It’s a deeply challenging look at life using the Ten Commandments from the Bible as a point of reference. Each song takes the idea from the individual Ten Commandments and uses that as a platform to challenge listeners’ preconceived notions about life, culture and society.

The first track is “Zealot” which Ethos describes as an indictment on how humanity has twisted the purpose of the church over time. While he doesn’t exactly say that man has gotten it wrong, he does nudge the listener to look beyond mere blind faith and question the reasons why belief is there in the first place.

He follows this up with “Idolatry” which is a song that he said takes a closer look at anyone who would be arrogant enough to portray themselves as an absolute answer to anything.

“There’s a lot of symbology in the video for that song,” he said. “Really, I’m pushing people not to have role models that they don’t know a lot about. Don’t blindly idolize things – like the church, or gang leaders, or politicians or whomever. Too many people decide to go one direction without considering other perspectives. Don’t idolize. Be yourself.”

A skit he has titled “Vanity” serves as the third track on the album and highlights the hypocrisy of today’s church leaders. This is followed by “Sabbath” through which Ethos challenges people to consider what they’re filling their lives with and how those things might be more negative than positive.

“A lot of people can’t even get the time they need to be themselves,” he said. “You can’t relax nowadays, and even if you try to, you still get hounded. This song is about learning how to put your foot down and be honest about what you want and what you want to do. If you want to keep your sanity, you need to take some time off – especially if you have children.”

“Vanity” is a bit of a break in terms of tone and sets the stage for some harder songs to come including “Parents,” “Murder” and “Adultery.” The first is a song that he said is a direct message to his birth mother, but which also encourages all other parents in the world to let their kids learn to stand on their own. “Murder” turns a corner in the album in terms of tone and subject matter. Ethos uses the song to call out anyone who follows a crowd for no other reason than that they want to belong.

“It’s about sheep and ‘Yes men’ on the front lines who don’t think for themselves, they just do what they’re told to do and people are dying for it,” Ethos said. “I’m trying to get the point across that we’re all brothers and violence isn’t the answer.”

“Adultery” is a song that Ethos said is very intense and is pulled directly from his own personal life experiences. It’s almost like he’s telling the story from his perspective, and he leaves no room for interpretation in what he’s saying.

“I’m telling the cheater that they’re an asshole for leaving, and it’s also an indictment on the person being cheated on because they’re afraid to try again,” he said. “If someone says that they love you, adultery is not a behavior you should do on someone you love.”

Ethos finishes off the album with two more songs and a skit. One song is “Klepto” which of course revolves around the idea of not stealing. But theft in essence serves as a metaphor for people who mooch off others to get ahead. Ethos said he can’t stand it when people are too lazy to get a job or get ahead in life and instead “steal” from others around them.

The skit “Married” follows that song and sets the stage for “Covet” which caps off the album. All of the songs come in under 30 minutes, and Ethos said it’s a project that is meant to be listened to from start to finish in order.

“I tried to make it as immersive of an experience and as deep of an experience as possible,” he said. “I tried to create a concept and make debate points, with things in the songs that can get crowd involvement whenever I’m performing live. Ultimately, I’m trying to create a debate in a neutral fashion with good music and to the best of my ability.”

To listen to Ethos music or to follow him on social media, please visit: